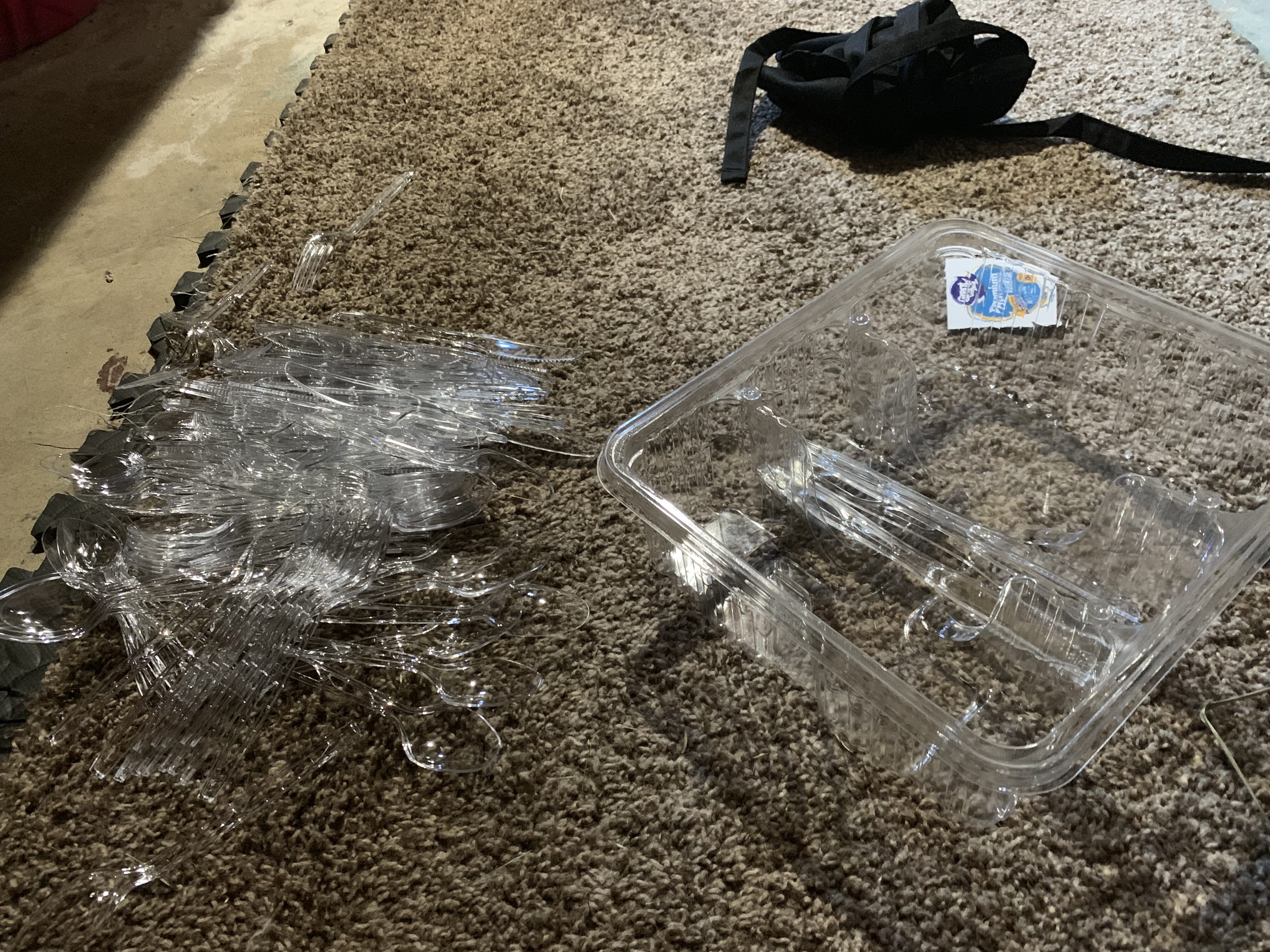 Who Spilled the Spoons?

A few days after Impatience I was in our basement trying to organize all the stuff that was bought and borrowed and begged for in the weeks leading up to the fundraiser, and I spilled a box of leftover plastic silverware.

I was still early in the process of organizing – everything was in piles covering our ratty old pool table and every other non-floor horizontal surface available. I was still exhausted, sore in a surprising number of places, and oh-so-ready to have the piles of stuff out of my house or packed away for a while. As soon as it was done, I could contemplate all of this from the safe distance of time and willful forgetting, (not to mention the inevitable rosy glow of living my calling in service of those less fortunate) and talk myself into doing it again next year. But then I pushed a box to make room for some other box, forgetting the carton of leftover silverware – mostly spoons and knives – that I had only a moment ago “temporarily” perched on the edge of the table behind it.

The box of flatware crashed to the floor. The basement floor. Our basement is not finished and is mostly used for storage and as a giant playground for two of our three pet house rabbits. The strip of carpeting it fell on - an uneven runner of remnant that exists solely to give our furry friends extra purchase on the floor when they hop out of their sandbox to do zoomies and binkies around the table in celebration of their having recently dug a pound of sand out onto the edge of that same carpet - hadn’t been vacuumed for weeks and was doubtless full of sand and fur and whatever else accumulates in a basement storeroom while the occupants are busy with a marathon of party prep and wanton house rabbits are in charge.

I sighed and walked around to the side of the table to see if it had somehow landed without breaking open or some similar miracle, but there was no miracle to be had. I had spilled the silverware on the nasty floor and now I had to decide what to do about it.

“Just throw them away!” said the irritated voice of a loved one in my mind.

That person I love tends to feel that they have bigger problems to deal with than worrying about whether their old couch takes up too much space in the landfill, or whether it might have gotten some more use by someone else. I know my habit of trying to give away every old or unwanted or even broken large item grates on my entire family, and think about the burn barrel that served as my family’s personal landfill when I was growing up.

“Those are nasty.” Says the disgusted voice of another loved one. “You don’t have to throw them away – you could just recycle them. But they’ve been on the floor and no one will want to eat with them.”

This dear friend of mine has a spotlessly clean, beautifully decorated house. They don’t mean to be judgmental, but I don’t think they can imagine what it would be like to need to save $5 on anything, let alone something that is disposable anyway.

Yet another voice – this one a hesitant whisper – says, “You could just wash them.”

Another, louder – “No, they’ll know… if they found out those forks had been on the floor…”

I wait. It seems the cases have been made… and then comes the whisper again. Faster now. Urgent. “They’re just dusty. You could rinse them off, let them dry in the colander – no one would ever even know. Why throw them away? Last week you paid ten dollars for that box of silverware (from Walmart you cheap ass!) and if you throw it away, next year you’ll just have to buy more. Just because he would throw them away and she would recycle them that doesn’t mean you have to waste them!”

I wait again. I genuinely don’t know what to do. And then, I do. The whispering voice suddenly speaks out loud.

So I scooped up the spoons and knives. I took them upstairs and rinsed them in hot soapy water. I put them inside my giant pasta drainer and rinsed them again in clear cold water. I let them dry in the colander and smiled when I saw the way they sparkled in the sunshine. And when they were dry and sorted and stacked neatly once again, I put them away with the rest of the party supplies and thought about how many chronic pain patients are out there right now, running out of spoons, and wishing they had someone like me to help them retrieve a few more from the floor.

Someone has to pick up the spoons, and that someone is me.